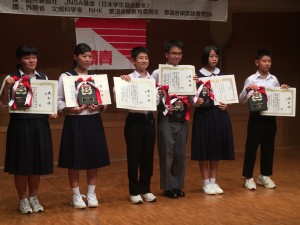 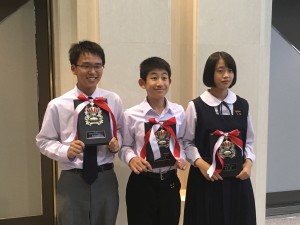 Way of the Cane

Look closely at me.  Do you see a small, thin, geeky boy?  Let me warn you.  I am actually a radically powerful and dangerous boy.  Don’t attack me unless you enjoy defeat and humiliation.  My name is Sota, and I am a master of the ancient Japanese martial art called jodo.

No, I didn’t say judo.  I’m not big enough for that.  And I didn’t say karate or aikido or kendo.  Those are the “popular” martial arts, the “vanilla ice cream” of martial arts.  Jodo is the raspberry-marshmallow-rainbow-swirl-surprise ice cream of martial arts.  In jodo, two players fight using swords and wooden canes.  Do you know the light sabers in Star Wars?  It’s just like that!  And I am a jodo warrior.

I began to learn jodo when I was seven years old.  My teacher was a really old man, almost 50.  Maybe I wasn’t his brightest student.  He always said, “Faster, Sota, faster!  Watch your feet!  Be careful with your grip!  I said watch your feet!  Now hold the cane higher!  Now lower!”  You understand why I was confused.  But I kept practicing.  He taught me strictly but kindly.  “Yes, Sota, yes!  That’s very good, very good, very nice, very nice, excellent, excellent – no no no, what are you doing?”

One day I was riding my bicycle to jodo practice, and a police officer stopped me.  He said, “What are you carrying?  That cane is sticking out, and it’s not safe.”  I said, “Oh, that’s a jodo cane.  I’m a jodo warrior.”  He said, “Oh, you’re a warrior?  You’re cute, aren’t you?”  He was toying with me.  But he asked me about jodo, and I told him.  Later, that police officer joined our school.  I recruited him!

When I was a fifth grade student in elementary school, our principal heard that I studied jodo.  He also asked me about it, and I introduced him to my jodo school.  The next week, he visited the school, and later he joined too.  So at my school I was senior to a police officer and to my own school’s principal.

That year, because I was so powerful, I was chosen to participate in the national jodo championship.  It was held in my hometown of Nobeoka.  I was excited!  Jodo warriors from all over Japan came to compete in our local gymnasium.  I was worried.  “That gymnasium is pretty small.  How will thousands of jodo warriors fit inside?”  They fit inside because only 48 people came.  I participated in the youth competition.  I came in second place.  Second out of two.

That day, I realized that I am very good at a sport that almost nobody plays.

That’s why I’m here today.  I want to invite you – all of you – to come and experience jodo, the raspberry-marshmallow-rainbow-swirl-surprise ice cream of martial arts.  Perhaps you, too, can become a master of jodo, the “way of the cane”.